I am currently charging my swimming mp3 player. My towels and swimsuit are drying. I sync’d my Garmin watch to the app, so it’s empty. I have most of my change of clothes packed. Once I put the clothes, towels and music into the swimming bag, I’ll be all set. Except, I forgot soap in my shower bag. One day, I’ll get to the gym with everything I need. Today wasn’t that day. Maybe it’ll be tomorrow?

This morning, I got up early and went to the gym to swim.  I did a short swim, since it’s been so long since I have been in the pool.  I got in the hot tub after the swim, but I found that they had turned the temperature down, so it wasn’t a decent soak.  I went into the steam room, and enjoyed that until the steam kicked into high gear and scared me.  I felt like I was in Stephen King’s, The Mist.  Loved that book, but it scared the crap out of me.

After I showered with the low pressure water, including getting the shampoo out of my hair completely, and fully shaving my legs for a change, I got dressed and went out to the car.  I realized that I had too much time on my hands before I had to be at work.  I filled up my windshield washer reserve.  I vacuumed my car, but barely.  Then I headed to Starbucks in search of coffee.

I got to work without spilling the coffee, and I remembered to park in the new spot.  We will get ticketed if we park where I used to park.  After warming up the machines at work, and treating a few patients, we had a break.  I called the bank that has been emailing me over and over again.  “Your account has a low balance.”  “You seem to have forgotten the answer to your challenge question.”  I don’t have an account with that bank.  The person I spoke to told me that I could fix it easily by changing my email address.  No.  Just stop emailing me.  She said the only way to do that is to pop my head into the local branch and tell them what’s going on.  Ok, where’s the closest to me?  Sorry, we have no branches in California.  Great!

I got several blog posts posted.  I had started writing them a while ago, but I finally got around to publishing them.

I also had lunch.  Accomplishment!  Next I’ll be starting my after work list.

Today’s goal was to hit the gym.  I wanted to swim, but I was just too blah when I got there.  I had to change the billing card on the membership, so I had to go.  I ended up on the treadmill for a short while, trying to catch up on my fitbit steps.  I stayed on the treadmill until my foot started to hurt.  I didn’t even make it a half a mile on the darn thing, but I met my goal.  I went to the gym.  Baby steps.  I also got some of my audiobook, A Tree Grows in Brooklyn, done.  I have about 4 hours left in it, and it’s due back on Wednesday.  Hopefully, I’ll make it.  The bookclub for that one isn’t until mid-July, so I can afford a little time on the waiting list, again.

My other goal was to find my shower bag for the gym, so I can actually swim before work.  Found it!

My swim bag is packed for tomorrow, except for socks.  Best laid plans…

The garbage, recycling, and compost are out.  We only had one minor incident there, involving a man walking by and ogling my daughter.  The dogs took offense, and the man went off screaming.  They are just noisy dogs.  The guy didn’t know they are big chickens and their barks are worse than their bites.  At least the dogs keep it interesting around here. 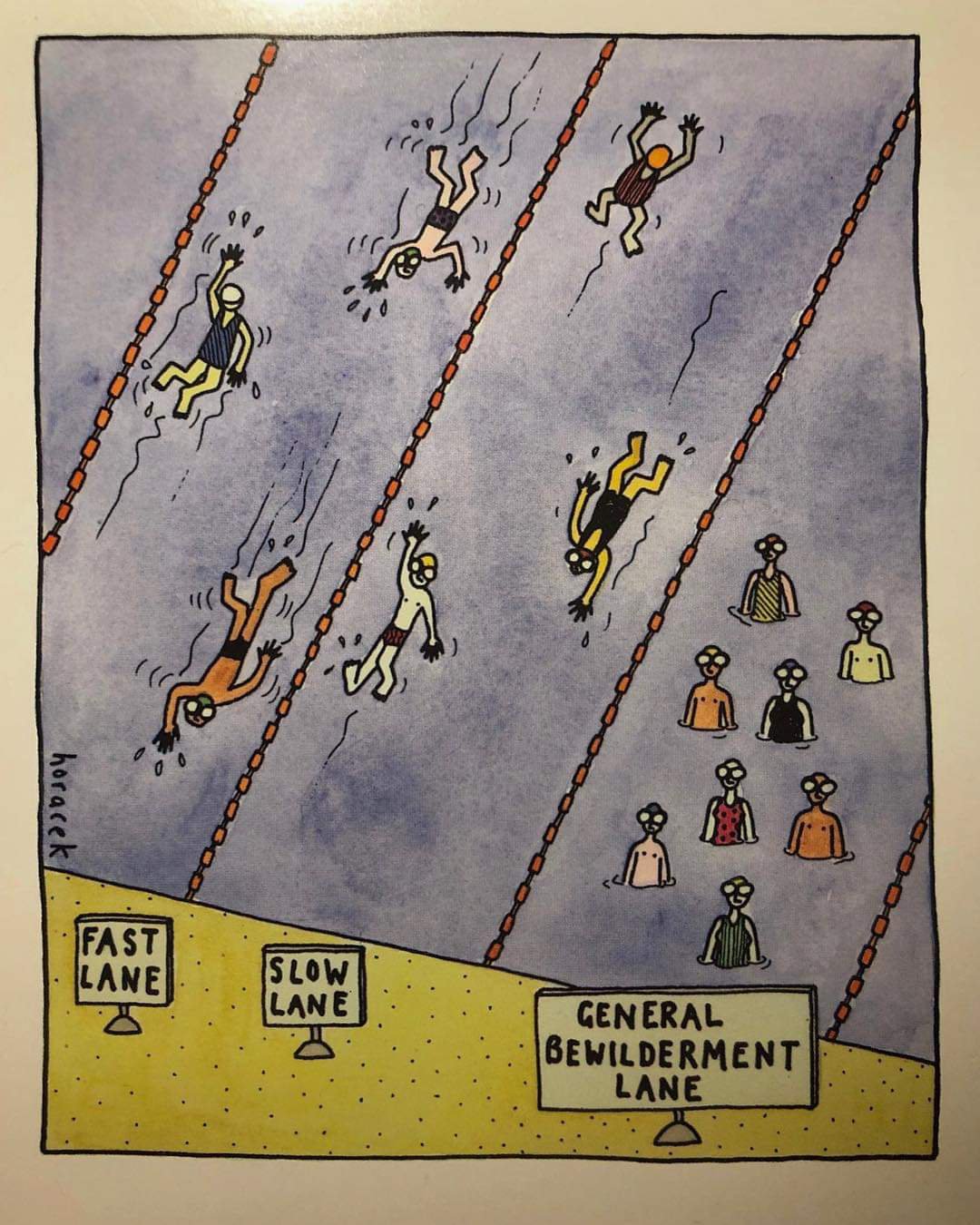 These people in the general bewilderment lane are doing it right. One of the things that annoy me about pool swimming is the walkers. The walkers don’t need a full lane each. Especially when they are chatting with their friends in the next lanes. All walkers can go in the same lane, so the swimmers can actually swim without going around the obstacles.

I looked at the pictures of this pool, and my first thought was what if you drop something all the way down to the bottom?  You’ll never get it back unless you are in the scuba diving class or certified.

deepest pool in the world

Those of you who know me well will be surprised that I spent zero time at the pool. We didn’t even sit on a lounge chair. I did, however, spend time in the water in Cabo San Lucas. My daughter’s got those photos. I didn’t bring my goggles so I didn’t full on swim. I had to check out the buoys on the edge of the swimming area, though. I made some people nervous doing that, though. They weren’t even as far out as the buoy line at Aquatic park, though. Plus it was much warmer and clearer. I could see plants and fish. I body surfed back to shore, so it wasn’t a strenuous swim by any stretch of the imagination.

I did briefly consider asking the water temperature every morning the captain announced the stats. With the air temp being what it was, I can only image that the water at sea was chillier than I’m used to

I have had several Christmas get togethers already. The people giving the gifts knew me well, for the most part.

My uncle gave me a major hint about what to get him for Christmas, which was much appreciated. I received a Starbucks card from him.

My manager at work handed me a Fandango gift card and declared me the most impossible person to buy for. My coworkers stepped up to my rescue and told her she just doesn’t listen to me. That was great.

I had a friend give me a book that was on my to be read book. She already read it, so she gifted it to me because the book exchange she was going to required only new books over $15. She decided she wasn’t going to the exchange. I benefited.

Another friend pulled my name for the stocking exchange. I received a book mark, Giants, swimming, and Tinkerbell items, along with other things.

My kids gave me stuff for my upcoming trip and pjs for the family party last night.

My parents gave me a bottle of wine, a book seat (I’ll blog about that later), a couple of books, and chocolate. I also got a couple of Tinkerbell towels and more pjs. Mom couldn’t figure out how to gift ebooks, so I didn’t receive them from my parents.

This year, the gifts were well thought out. I feel like I was slacking on giving, but I did ok with the giving. It’s just that all the gatherings are spread out this year, so the gifts went over several paychecks.

I received snuggles from my nap buddy and was acknowledged by Mini. I was also allowed a three hour nap. So I got lovely gifts from the felines.

bookworm at the gym
Blog at WordPress.com.