This movie was assigned to me for film class. The title and description caught my attention, but I just wasn’t sure I wanted to watch it. I was wrong. I loved it!

The film took place during the Vietnam War. A family of Aboriginal Australian people formed a singing group and wanted to go entertain the troops in Vietnam.

The music was great and I loved that it was based on a true story. I recommend this movie to anyone who likes music from the time.

When I went to see A Bronx Tale a few weeks ago, I noticed that there was a brick and mortar store for the art store we order from. We decided to go there instead of paying shipping on the class supplies we need for the upcoming semester.

The train ride there was uneventful. We decided we were hungry enough to eat early. We got koja. Yum.

We walked down to the art supply store and picked up the majority of what we needed. Then we sat in the canvas area and did fake math to figure out what to buy. We also decided to mail order the huge sketch book and the canvas stretcher bars so we didn’t have to lug them home on the train.

On the way back, we saw a pigeon hanging out on the street, but it found a little nook in the side of a building. Small children were stopping to point at it. Smart pigeon to stay out of the way of foot traffic.

We stopped at the restroom in the mall and there was a woman who had bypassed the line and was busy telling herself, and anyone else who would listen, about how it’s unacceptable that she should have to wait because she’s going to wet her pants.

We went to Beard Papa to get cream puffs for the family and my co-workers.

We caught the train to the station near home, since our own train was going to be later. I like doing this so that I can catch uber if the train is really really delayed. I released another book crossing book into the train station.

Our train came. It was one of the new Siemens trains. They are designed so that you can put more standing people on. No one is comfortable on them. The seats are too big for two people and too small for three to sit comfortably. The holding rails are too close to the seats, so standing people have to almost stand in the laps of the seated people. The stop request buttons are only by the doors and there is only one emergency stop button. They are loud when you are outside and they pass by. Who designed these things?

When we get a little closer to home, a lady got on, singing. She had her phone in her hand, so I assumed she had headphones on. When I looked again, I realized that she had cotton balls stuffed in her ears. She must have just been singing.

I was offered a free ticket to see A Bronx Tale with a friend. I jumped at the chance. I was free in the morning before I was supposed to have a Christmas celebration at my aunt’s house.

The night before, my daughter had a dance performance and as it was finishing, I got a text that I would need to go to work the day of the play. Because of both the play and the Christmas celebration, I really couldn’t unless it was early or late. My co-worker was out of town, so she wouldn’t be available until the next day. Therefore, late it was.

I got a call early morning, from my manager, confirming that I’d have to go in. So much for sleeping in a little.

I got onto the train, with about fifty people dressed as Santa. It was noon and they were very obviously drunk already. It was obvious that my quiet reading time on the train was not happening today. After a few texts to friends and an internet search, I found out that Santa con was happening today, and they’d be getting off at the same stop as me. I got serenaded with loud, off key, drunken Christmas carols mixed with drunken rounds of “hey! Everyone shut up!” No one did. 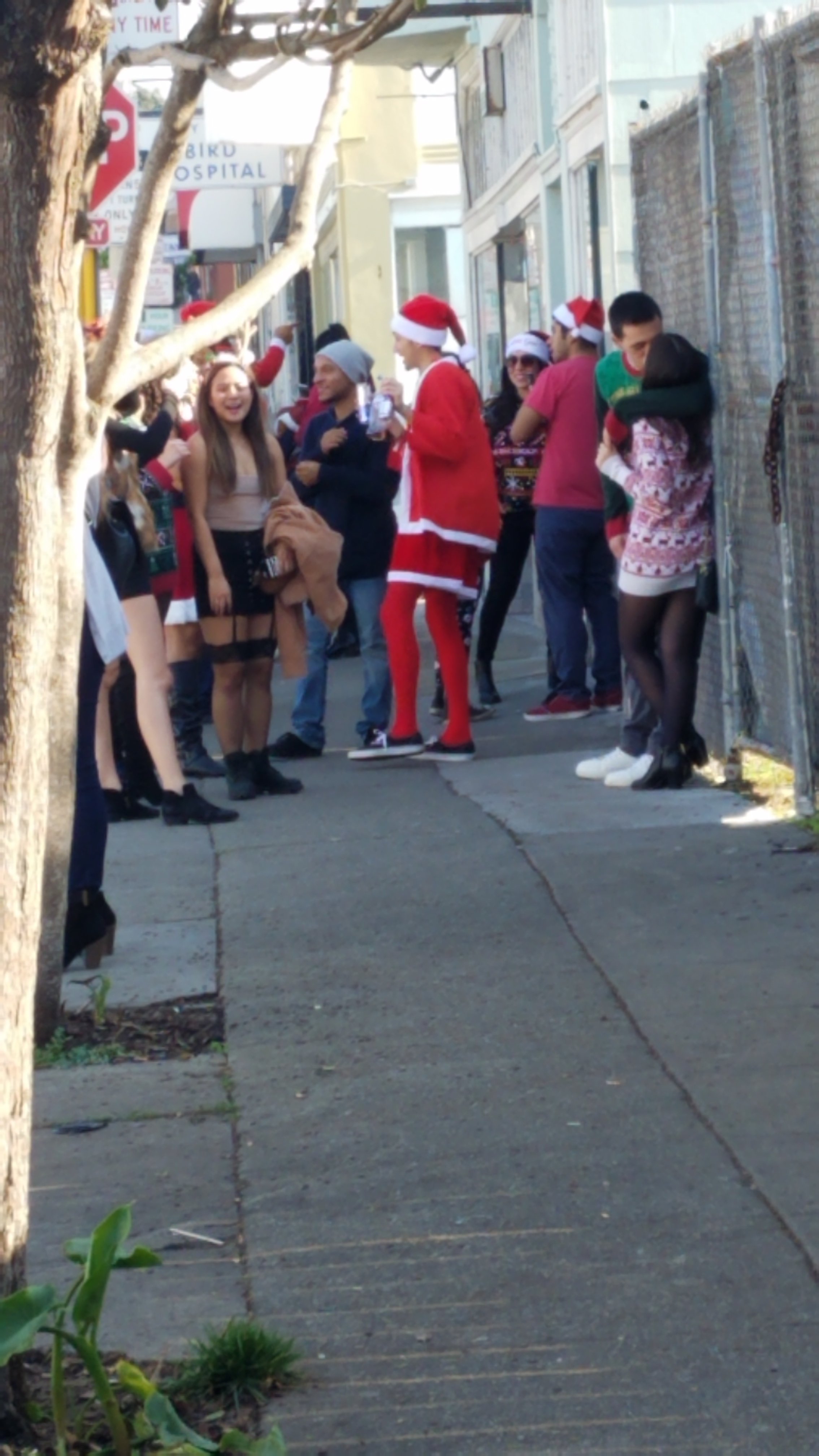 Santas and I got off at our stop. I still had walking to do, and an hour to meet my friend. I saw which way Santas were walking and I went the other direction to find lunch.

I found that my favorite Thai place had closed, so I had to look around. I found a koja place. Koja is like a sandwich, but it uses rice instead of bread. I was very, very happy with my choice. I had a pulled pork koja, and it was delicious! I recommended the place to my friend, and she’d been looking for a place that had them, other than food trucks.

After lunch, I went outside to find the beginning point for my walk. I saw a sign and thought that maybe it would be helpful. It was not. 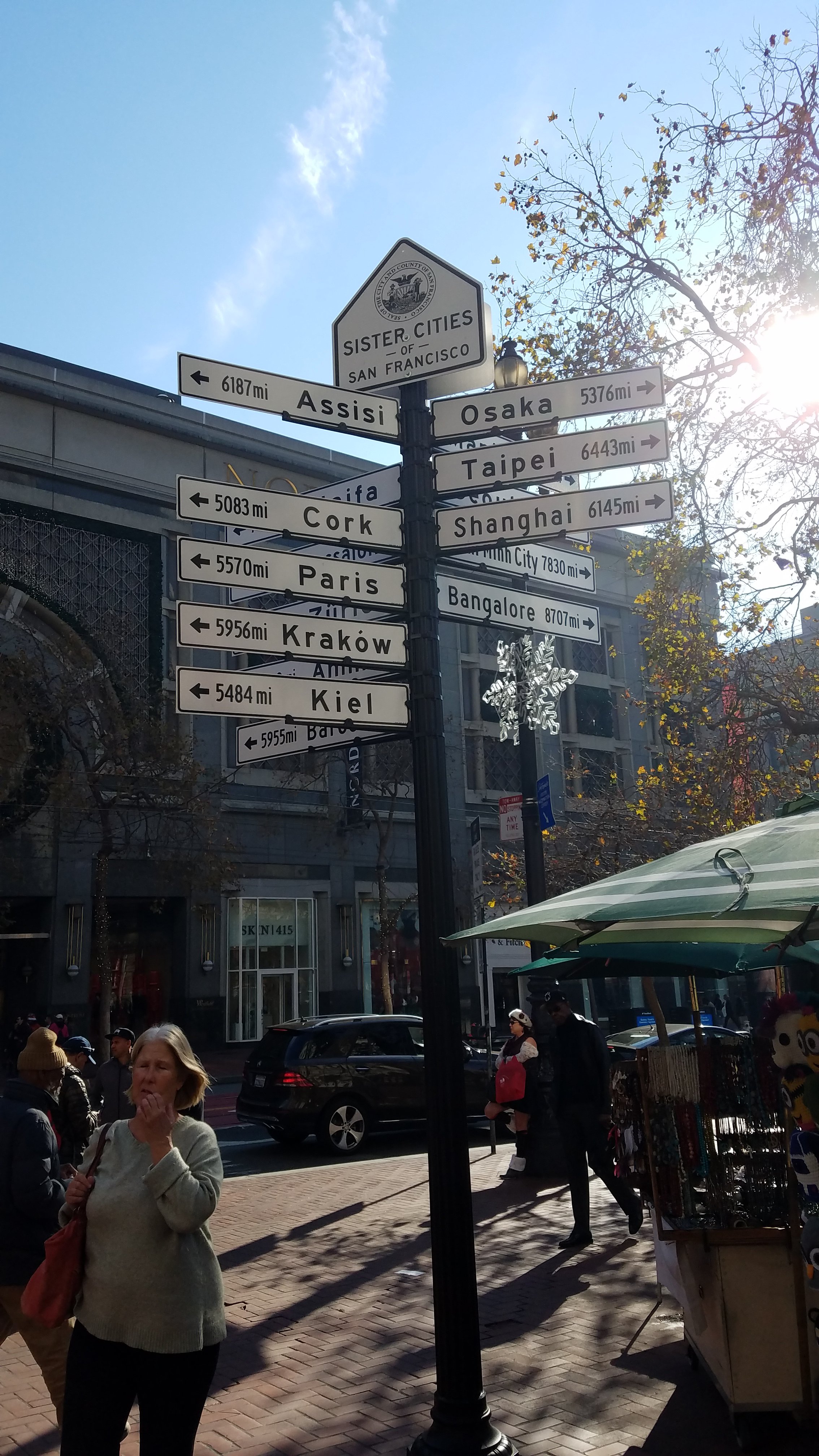 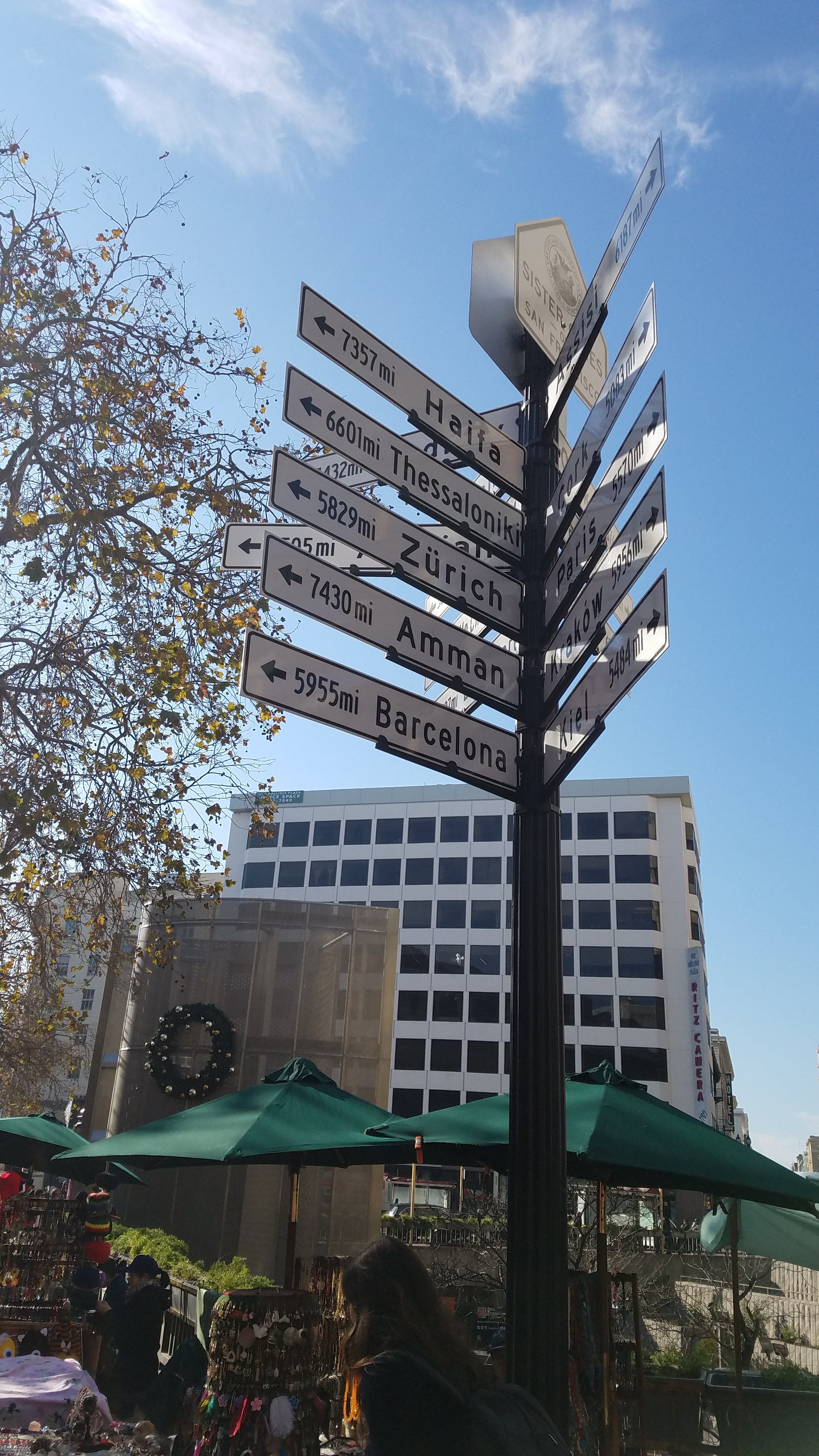 I figured out the right direction and headed on my way. When I was almost to the theater, my friend texted that she had arrived. I told her where I was and she said she saw me and to turn around. I turned 180 degrees. Didn’t see her. So I continued to turn the full circle and walked toward the theater so I could turn my back to the theater and take a better look. I finally found her and her cousin who was joining us.

We were still super early, so we went to get coffee. We watched a long parade of Santas going by as we drank our coffee. Then we were joined by the pot smoker who was standing not very close, but was definitely causing the pot smell at the coffee shop. I managed to spill about a third of it down my cleavage. At least I was wearing black. No one could see my coffee, but everyone could smell it. I had forgotten perfume, so I guess this made up for it?

We got to our seats without any major issues. The show was wonderful. I had gone in without knowing what the story was about, but I had read that it started out as a one man show. As I was watching it, I could definitely see how it once was. The rest of the cast just made it that much more wonderful.

After the show, I jumped into an uber. We were delayed by the Santas again. I made it to my family’s Christmas celebration just as everyone else did. I had a nice visit with the family. I found out that one cousin was the EMT at the Santa con event and another was staying at a hotel smack in the middle of the Santas. I had to eat and run because of heading to work.

Work went smoothly other than me being in my dressier top and my manager being in full stage makeup, including false eyelashes. She’d had a singing performance right before going into work.

I got home at a reasonable hour and settled in quickly. I plan on getting up later than usual in the morning, before heading back to work again.

My aunt had her children after I had mine, so now my children are adults, but I still have two first cousins in high school. The youngest is a freshman and in the drama club. She can’t see a thing without her glasses, so, in order to avoid stage fright, she takes off her glasses and is on stage, blind. 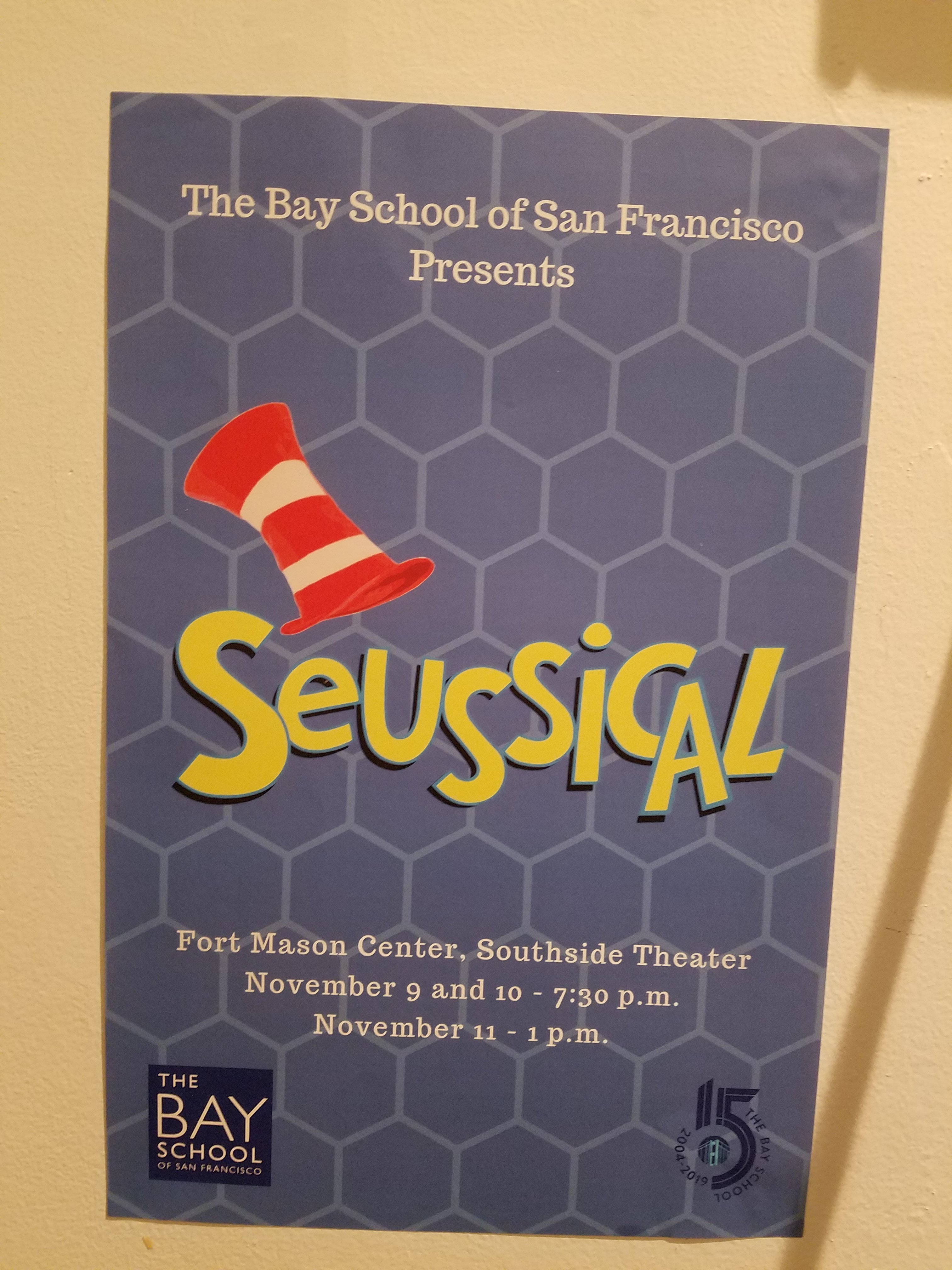 I hadn’t heard the musical before, but I was very familiar with the story as it came up. The songs were great and my cousin did a wonderful job. It was well worth the trip out to go watch.

I mentioned my plan to finish my book challenge for the year here.  I posted all but the last nine.

Here are a couple more that will most likely be read by the end of the year.

1. The Incendiaries – arrived from the library as I finished the previous library book.  This is the November book selection for the close book club.

2. The Proposal – the second book in the series of a book I enjoyed a few months ago.  I heard the author speak about it at the library.

3. Spinning Silver – double points for this one.  It’s a big paper book that’s been in the stack for a while, plus the big book club chose it for the December meeting of the sci fi/fantasy group.  Score!

4.  Their Eyes were watching God – I am quite a ways through this one.  It was an unfinished book for classics book club a few months back.  I may as well finish it and get it off my shelf.  It’s also a paper book.

6. Crazy Rich Asians – I think this might be next on my buddy read list, since we had discussed reading it, but Neverending Story got pushed to the front of the line.

7. The Hamilton Affair – I saw this production and would like to know the story, without music.  And without the drag queens.  Nothing wrong with the drag queens, but they tend to distract from the story and pull attention to themselves.

I will have time to add to the list.  But there’s a general plan for the next couple of weeks.